In this day and age, women are choosing a variety of ways in which to give birth. Some want to give birth at home with a midwife by their side, some choose giving birth to their baby underwater, some want to experience a natural childbirth in a hospital with no pain medication and some want all the pain medication they can get!  In the past Cesarean section births were only used in cases of emergency. These days, a lot of women are asking to go that route.

Last year, four of my closest women friends, one being my sister, gave birth to beautiful healthy babies. I was amazed at how different their pregnancies were- from beginning to end, they each had entirely different experiences. However, pain is one thing that they all had in common.

In one study, published in the Chinese Medical Journal in 2009, researchers from Kaohsiung Medical University in Taiwan assigned 60 women who had undergone C-sections either to a control group or to a group that received pain treatment via acupuncture or electro-acupuncture. They found that compared with the control group, women in the acupuncture group had significantly lower pain scores in the two hours following surgery, requested morphine an average of 10 minutes later, and used 30 to 35 percent less morphine within the first 24 hours after surgery. They also experienced significantly fewer opioid-related side effects. 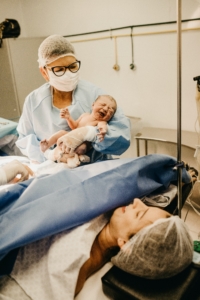 Indeed, the Cesarean study is not the first to link acupuncture to lower painkiller use following surgery. A study conducted by researchers from Duke University and presented at a 2008 conference of the American Society for Anesthesiology reviewed the results of 15 separate clinical trials involving the use of acupuncture either preceding or following surgery. Whether undergone before and after surgery, acupuncture led to significantly lower pain levels and use of painkillers in post-surgical patients.

Whatever you are going thru, no matter how painful or challenging, Acupuncture is a powerful ally to have on your side!

Amanda Self  wears a variety of hats at Tao To Wellness. From Social Media to Medical Billing, she strives to bring healing light to all of her endeavors.  Amanda is a Reiki Master, a jeweler and is currently studying Herbalism, both in the classroom and out in the fields.