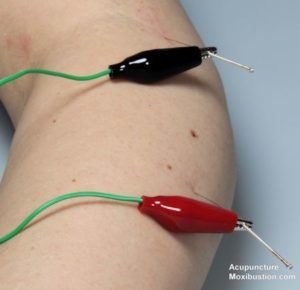 At Tao to Wellness, we most commonly use this for pain management, post-chemotherapy vomiting or labor induction.

According to Acupuncture Today:

“Electroacupuncture is quite similar to traditional acupuncture in that the same points are stimulated during treatment. As with traditional acupuncture, needles are inserted on specific points along the body. The needles are then attached to a device that generates continuous electric pulses using small clips. These devices are used to adjust the frequency and intensity of the impulse being delivered, depending on the condition being treated. Electroacupuncture uses two needles at time so that the impulses can pass from one needle to the other. Several pairs of needles can be stimulated simultaneously, usually for no more than 30 minutes at a time.”

“According to the principles of traditional Chinese medicine, illness is caused when chi does not flow properly throughout the body. Acupuncturists determine whether chi is weak, stagnant or otherwise out of balance, which indicates the points to be stimulated. Electroacupuncture is considered to be especially useful for conditions in which there is an accumulation of chi, such as in chronic pain syndromes, or in cases where the chi is difficult to stimulate.”

It’s also important to note, a study done by the The Cochrane Collaboration, a group of evidence-based medicine (EBM) reviewers, reviewed 11 randomized controlled trials on the use of electroacupuncture at the acupuncture point, Pericardium 6 or “Nei Guan” to support chemotherapy-induced nausea or vomiting. The reviewers found that electroacupuncture applied along with anti-vomiting drugs reduced first-day vomiting after chemotherapy more effectively than anti-vomiting drugs alone.  How wonderful is that?