There are two kinds of moxibustion; Direct and Indirect. 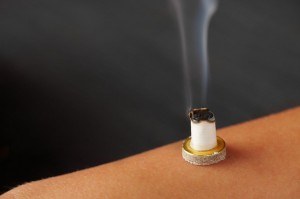 In Direct moxibustion, the herb itself is placed on the acupuncture point and ignited. It remains on the point until it burns out completely. This commonly leads to minor scarring in the area and for that reason is not used widely in Western countries.

The more common, Indirect moxibustion can be done one of two ways; one is the process of using the herb, usually rolled into a cigar, and waiving it over acupuncture points or areas of the body to stimulate the meridian or pathway.

The second uses both acupuncture and moxibustion. The practitioner inserts a needle and then wraps the handle with a ball of moxibustion, this is then lit and retained until the herb burns completely.

In traditional Chinese medicine, moxibustion is used to expel cold in the meridians, which leads to smoother blood and Qi flow. Here in the office, we commonly use moxibustion to turn a breech baby or for pain management.

A landmark study published in the Journal of the American Medical Association found that up to 75% of women that were suffering from a breech presentation before childbirth had fetuses that rotated on their own after receiving moxibustion on the point, Zhi Yin (Reaching Yin) otherwise known as Urinary Bladder 67.

It is also not uncommon for patients in Asian countries to burn moxibustion on certain acupuncture points for longevity and overall health. Usually this is of the Direct kind and is less common here in the Western world.