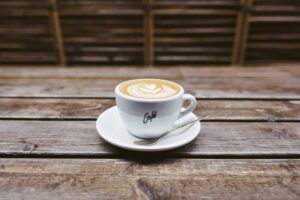 There you are: you wake up in the morning, maybe a bit groggy from the night’s slumber (yawn); where’s that coffee?!

Or maybe it’s 3pm and you have two or three more hours of work – EEEEK!

How will you get through?  Afternoon tea, chocolate, energy drink or more coffee?  Anything that possesses that magical chemical called CAFFEINE!

Worldwide, we reach for caffeine to help alter our sleep/wake cycle, but how does it do that and is that the best idea in the long term?  Is there another option?

A lot of my patients say, “but I only have one small cup in the morning”.  Some admit, “I cannot function without coffee and I drink 5 cups a day…” then add “but it doesn’t effect me”.  Still others say, “It’s the ritual and the taste that I love!”

Everyone has totally valid reasons to love coffee or tea or whatever floats your boat.  It tastes good, it’s a ritual, it’s a necessity, right?  So, let’s break it down; what’s actually happening when you drink or eat caffeine?

Now, we are about to embark on some chemistry and biology, but don’t let it deter you from finishing the article!  It will all make sense in the end.

The Effects of Caffeine on the Body

Let’s talk about Adenosine first.  Adenosine is the by-product of cellular processes, and this molecule conducts the sleep/wake cycle; caffeine looks just like it, structurally.  After you drink or eat caffeine, it gets absorbed by the small intestine and dissolved into the bloodstream.  And since caffeine is both water and fat soluble, that means it can penetrate the BBB (blood brain barrier) and enter the brain. While it’s in the brain, it neatly fits into the brain cells’ receptors that are available for adenosine (remember because they look alike), essentially blocking them, which creates a sense of alertness and energy for a few hours – maybe up to four!

So regardless of your natural circadian rhythm, you ‘wake up’ from the caffeine.  In addition to that, two other things start happening. The pleasure center in the brain gets pinged and dopamine gets released, which makes us alert, focused, motivated and happy!  And lastly, since we have all this extra adenosine floating around the brain, that signals your adrenal glands to secrete adrenaline, which is yet another stimulant.  It’s a triple threat!

Scientists say that caffeine isn’t just a stimulant on it’s own; “a stimulant enabler, it’s a substance that lets our natural stimulants run wild”, says Stephen R. Braun, the author of Buzzed: the Science and Lore of Caffeine and Alcohol.

To understand the dopamine release better, let’s talk about Skinner’s Box. Back in the 1950s, a scientist named Skinner put electrodes in the feeling centers of rats’ brains and sent a little shock to the area when a rat entered a particular corner of the box; the theory was if the shock was bad enough / painful, the rat would stay out of that corner: enough shocks and the rat’s brain would hardwire the corner as adverse. Yet when the electrode was placed in the nucleus accumbens, which is a dopamine pathway, the rats did just the opposite; hungry for more and more dopamine release, they returned to the corner again and again, up to 700 times per hour! They even chose the stimulation over food.  Fascinating!

So the thing to consider is: are we like Skinner’s rats – have we hard wired our brains to think caffeine is all that, or can we get a dopamine hit from somewhere healthier?

Another interesting thing to know is that dopamine doesn’t just get released when that ‘thing’  pings that area of the brain, but that dopamine starts getting released when we are merely thinking or anticipating the reward!  Meaning as soon as we start to think about having the coffee, the happy hour cocktail or smell fresh bread while walking past the bakery, our brains are already releasing dopamine; essentially, it’s like a trick in a way, because then when we get it, we are even more excited and think this is the thing that makes me happy!  Which of course is not the truth.

Dopamine or the dopamine reward system isn’t the problem; the problem is how we stimulate the dopamine pathway.  The things that stimulate the pathway can run the gamut; caffeine, alcohol, drugs, cigarettes, falling in love, sex, Netflix, pornographic videos, shopping, gambling, yoga, meditation, healthy eating, etc.  Some of these things can be viewed as ‘positive’ and others ‘negative’ if you will, but really anything in excess can be harmful. And if you really think about it, we can essentially make ANYTHING light up our dopamine pathway, so why not choose the ‘good stuff’?

But is Caffeine Really That Harmful?

The obvious risk is because caffeine is habit forming.  Over time, the brain’s chemistry and physical characteristics actually change and you are no longer accessing your body’s natural energy resources.  The most notable change is that brain cells actually grow more adenosine receptors!  It’s the brain’s masterful way to maintain equilibrium in the constant onslaught of caffeine.  It explains why regular coffee drinkers build a tolerance over time; since it takes more caffeine to keep up with the body making more adenosine receptors, it takes more caffeine to reach the desired effect.

Maybe it’s not so much of the what the harm is, but what we are giving up by being a slave to caffeine?

What Are the Symptoms of Caffeine Withdrawal?

When patients decide to quit caffeine for good or temporarily, the sudden giving up of caffeine can trigger a whole slew of symptoms. The most common symptoms are fatigue and headaches, which make complete sense.  Basically, your brain is used to operating in one set of conditions that depend on caffeine and now that’s gone.  So, there is now a surplus of adenosine neatly tucked back into their receptors, a decreased number of norepinephrine receptors, no dopamine, no adrenaline, no trifecta, triple threat.

Where the body was used to caffeine actually narrowing the blood flow to the brain, without it your blood vessels widen, resulting in a boost of blood flow that is causing pressure, which is causing a headache.  Other symptoms that may occur are depression, anxiety, lack of focus and irritability – all symptoms of your body protesting.  Sometimes dull aches and pains, nausea or flu like symptoms may occur as well.

You’d think we were talking about kicking a hard drug, but no – it’s ‘just’ caffeine!

80% of Americans drink it; it’s so woven in the fabric of America that we forget it’s a drug and the world’s most popular psychoactive one!  Back in 1994, scientists finally established that caffeine withdrawal be included as a mental disorder in the 5th edition of the Diagnostic and Statistical Manual of Mental Disorders.  So, it’s not ‘just’ caffeine.

How Long Do Caffeine Withdrawals Last?

The good news is, compared to many drug withdrawals, the effects are relatively short-term. Most patients report about 5 days of discomfort, while some who were drinking 7 cups of coffee a day, reported discomfort for up to 14 days.  During that time, your brain will naturally decrease the number of adenosine receptors on each cell, responding to the sudden lack of caffeine ingestion. If you can make it that long without caffeine, the levels of adenosine receptors in your brain reset to their baseline and the addiction is broken.

During one of our annual detox and elimination diet programs, we had a patient who was literally a slave to coffee.  He was a 7 cup a day drinker.  He did our program and abstained from coffee for 14 days. It wasn’t the easiest road for him, but in the end he reported not only did he have his energy back, but he no longer had digestive issues, was sleeping through the night for the first time in decades and felt balanced.  He swore he would never go back and to my knowledge he hasn’t.  Once he got through the initial withdrawal, he was able to assess with a clear mind that coffee was not doing him any favors.

Many patients miss the ritual and something hot in the morning. So for you coffee lovers, my patients have loved Chicory root.  It has zero caffeine, contains inulin, a prebiotic that helps promote gut health and reduces inflammation.  Also in a 2017 research study, chicory was found to help improve blood sugar in rats with Type 2 diabetes after eight weeks. Sometimes chicory is blended with coffee at coffeehouses so it’s a great way to cut your intake in half if that’s what you’re up for.  You can also purchase chicory by itself and make it at home.  One thing to note, women that are pregnant or breastfeeding should avoid chicory altogether.

Another alternative is a company called Rasa; they have several different blends: some with caffeine, some with a trace of caffeine from cacao and some completely without.  They are loaded with adaptogens, organic, gluten free and sugar free.  Check them out at https://quiz.wearerasa.com/#getstarted.

A third option is MudWTR.While it’s not completely caffeine free, it has roughly 30 mg of caffeine per cup, whereas one cup of coffee has about 100 mg. Yet it has so many wonderful adaptogens, anti inflammatory herbs and mushrooms that I almost think the wellness benefit outweighs the caffeine. One of their slogans is, “I wasn’t mad at coffee, just disappointed”.  I so get that.  They also have a new evening ritual drink that is caffeine free.  Check them out here: https://mudwtr.com/

Up for a recipe?  Chaga, which has been gaining popularity, is a mushroom loaded with antioxidants and extremely beneficial to the immune system.  Here’s a Chaga Latte recipe that a friend shared with me through MedicalMedium.com. If you are avoiding sugar or honey, you can leave it out or substitute Monkfruit.

For tea lovers, of course there are many, many herbal tea options – from simple chamomile to eccentric red raspberry leaf.  Keep in mind that Rooibos Red Tea is naturally caffeine free, and White Tea, which has tons of cancer fighting properties, clocks in at a low 25 mg per cup.

Not sure what to do?  Join us for a group detox!

We have an annual Tao to Wellness detox and elimination diet program every Spring.  Patients do it other times of year as well, but in the Spring we have a group that does it together- participants from New York to California and everywhere in between.  We eliminate things like caffeine, alcohol, gluten, dairy, corn and a few others because if we remove any and all potential allergens, the body becomes quiet and can detox more successfully.  You also get the opportunity of seeing what things in your diet aren’t doing you any favors.  It’s a way of cleaning the house or peeling back the layers to see the real sparkly you.

Share this article with a friend! Challenge him or her to join you for the detox, or drop the caffeine with you.  (As always, we love and cherish your referrals!).  Got questions?  Reach out to christina@berkeley-acupuncture.comcreate new email

One last word of advice

One more pearl of wisdom, if you have any trouble sleeping, which means number of hours, quality (not enough REM or Deep) or not sleeping through the night, I would suggest you omit caffeine for one month (at the least) and see how that impacts your sleep pattern and circadian rhythm.  Most people think that caffeine stays in the body for maximum 4-6 hours and while on some level that may be true, it is still metabolizing for up to 10 hours!  So if you are having a 3pm espresso, you could be impacting your sleep until 1am.  Think of it as gathering information, because sleep is one of the most important things you can do for overall health and longevity.